Tweet
By:
Paul Cox and Stan Cox
Topic:
Less of What We Don't Need

Whatever price tags are put on the destruction wreaked by Hurricane Irma in the past week, following Harvey’s destruction last month, there's one economic message you should expect to read (if you haven't already.) It will likely come from an analyst at Goldman Sachs, or the financial press, or maybe just that Facebook friend who likes to talk about GDP. They will explain how despite being a nearly unprecedented, bazillion-dollar disaster, Irma will not hurt economic growth and may even stimulate it.

After the initial shock there will be a construction boom; Loews and Home Depot stocks will rise; new cars will be sold to replace flooded-out ones. Such silver-lining talk is inevitable. The post-Hurricane-Harvey explaining has already started: the price of gas might have gone up a few cents, but soon, we are promised everything’s going to be all right, if not better than ever, macroeconomically speaking.

This message meshes well with Donald Trump’s shareholder-meeting-inflected statements about Harvey and Irma: “Texas can handle anything”; “We are going to get you back and operating immediately”; “We will restore, recover and rebuild together as Americans”; “We will endure and come back stronger than ever before.” While the president did break with market fundamentals by securing emergency federal funds, in the longer run it is the diffuse, private American “we” who will do all of these things, because that is what “we” do as citizens of the economy.

The American economy’s presumed self-healing power is a reassuring trope. It naturalizes a complex and painful process. The image is of a country that has stubbed its toe. It’s just going to walk with a limp for a few months and after that, it will run faster than ever. That which does not kill Florida makes Florida stronger, so let the wind blow.

But is it true? The conclusions of economists are mixed, but overall they show little long-term impact on growth  from one-off disasters, but do not support the idea that disasters provide economic stimulus. For example, a survey of all coastal U.S. counties between 1970 and 2005 found that on average, hurricane strikes slowed growth by a half percentage point in the year they made landfall and had no effect on growth in subsequent years.

The idea that a sufficiently advanced economy can soak up even Harvey- and Irma-sized disasters sounds true because it presents a stringently one-sided perspective that treats disasters as forces that impact economic growth, but not vice versa. The relationship between the two is really far more complicated. A disaster doesn’t befall a city; a city befalls a disaster.

Ignoring both current realities and the projected impacts of anthropogenic climate change, Florida and Texas shared a dizzying rise in risk-exposed assets and vulnerable populations during the meteorologically sedate span of years leading up to Irma and Harvey. Economic growth may or may not help people recover, but it has most certainly put lots of them in harm’s way in the first place.

When we were in Miami researching attitudes about sea level rise and climatic disasters in 2015, we were surprised to learn just how deep the growth imperative could flow, even in a place where people have begun opening their eyes to the catastrophe that lies ahead—in this case, the city’s inevitable inundation as the Atlantic keeps rising in the east and the Everglades’ waters keep flowing in from the west. Off-the-radar areas like the largely immigrant community of Sweetwater west of Miami were being left to endure increasingly frequent flooding until, presumably, the situation will become so bad that residents pick up and move away on their own dime. But in the hot markets of Miami Beach and Brickell, new luxury condominium towers, along with systems of walls and pumps to protect them from rising seas, were going up at a rapid clip.

Our Miami friends taught us that a rising Atlantic and supercharged hurricanes don’t necessarily make a badly-situated condo a bad investment, if you’re confident you can sell that condo to a greater fool at a tidy profit in a few years. The city itself depends on this game of hot potato, because the more condos that are built, the more essential are the property taxes to pay for all the flood-prevention infrastructure that’s going to buy the boom districts a few more years.

Not even the highly destructive near miss from Irma will slow the market down for long. In fact, there is a danger that having ridden out the Atlantic’s biggest-ever hurricane while dodging the doomsday scenario, property speculators will become even more reckless. After the storm, a developer commented, “Miami remains a very attractive place [for building and buying property]. I also think people forget quickly and it won’t have long term effects on real estate here.”

So when you hear economists extolling the economic bounce-back on a state or national scale in an increasingly calamitous future, it’s worth reflecting on the fatalist logic of Miami’s real-estate business.  An American economy that can continue to stay one step ahead of the disasters it is creating is an attractive idea, coming from excellent salespeople who won’t personally get their feet wet with the consequences. But that doesn’t make it any smarter – or any better a place to live – than a luxury condo sitting three inches above the waterline of Biscayne Bay.

Paul Cox (@Paul_Cox) and Stan Cox (@CoxStan) are authors of ‘How the World Breaks: Life in Catastrophe’s Path, from the Caribbean to Siberia.’  Write to them at cox@howtheworldbreaks.com. Stan is an editor at at Green Social Thought. 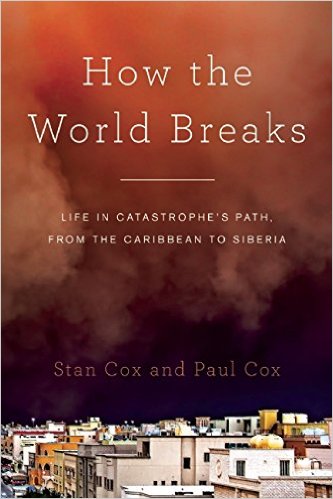