Tweet
By:
Priti Gulati Cox
Topic:
Less of What We Don't Need 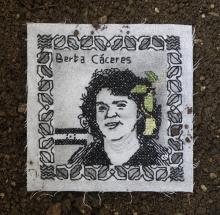 The ‘New Deal’ part of the Green New Deal is mostly good and necessary. But the ‘Green’ part has a big hole at its center: the lack of a direct mechanism to rapidly reduce the use of fossil fuels in the economy; therefore, it cannot guarantee their elimination on a crash deadline. It relies instead on an erroneous assumption that an industrial mobilization to build up non-fossil energy capacity will automatically eliminate fossil fuels and other sources of greenhouse emissions through the magic of the market. It also ignores the heavy ecological and humanitarian impacts of all ‘green’ industrial means of energy generation, including wind, solar, and (especially) hydroelectric power. It embodies the worst of technology-dependent magical thinking. — Stan Cox, author of The Green New Deal and Beyond (City Lights, 2020).

The Green New Deal (GND) and its vision to address the threat of climate emergency is an idea born out of an elite imagination. Its provisions for jobs, workers’ rights, racial justice, economic equality, social safety nets, and universal health care, laudable as they are, serve as sugar coating for a massive industrial stimulus program that is incapable of achieving a phase-out of fossil fuels and will likely juice greater emissions.

When I think “Green” I think growth. Something to be harvested, and whose value has always been measured not by its usefulness to its own existence and in harmony with the ecosphere it inhabits, but by its usefulness to the myriad product-designs of our harvesting eyes. Green has became a “left” color for a cause, a movement, a public policy proposal. Just another (maybe a darker) Green product. But a product nonetheless.

We tend to forget that there would be nothing green on this planet if it wasn’t for the brown: the soil that births what’s left of the lower-case green around us. Call it The Old Brown Steal: an arrangement for the continuation of a certain human lifestyle for a certain type of human.

In fact, there would be no green left on this planet if it wasn’t for Brown, indigenous fighters like Berta Cáceres, who stood between the corporation Desarrollos Energéticos SA (DESA) and her peoples’ sacred and precious body of water — the Gualcarque river, and was assassinated defending it. What a heavy price to pay for Green.

Capital must build in increasingly unsafe locations after the safest locations are used up… This is true for the construction of dams just as it is true for fossil fuels. It is also true for the location of solar arrays and the location of wind farms. It is likewise the case for mining the massive number of minerals that go into the production of various type of energy. This is why ‘alternative’ energy cannot be ‘clean’ or ‘renewable.’ Perhaps it is time to realize that there is only one form of ‘clean’ energy – less energy. — Don Fitz,From the Murder of Berta Cáceres to Dam Disaster in Uttarakhand, Green Social Thought, March 2.

March 2 marked the five-year anniversary of the murder of Berta Cáceres, an Earth defender and indigenous Lenca from Honduras. DESA’s design was to plant the Agua Zarca hydroelectric dam on the Gualcarque. It took many brown lives, including Berta’s, to stall the construction of an “alternative” form of energy. For now.

“Alternative energy” sounds like another genre of music — very groovy, but still very much part of the capitalist system. Capital, no matter how Green, has always plucked pieces of the brown earth to keep the engines of extraction greased and moving. It keeps plucking another piece, and another, and another, till a Brown person like Cáceres and millions like her who have had enough stand in its way with their bodies like juggernauts of resistance, an extension of the brown beneath their feet, if you will. And so they must be plucked as well.

Making Chevron and other companies clean up the messes created by their oil production will speed the transition away from fossil fuels, according to Rex Weyler, an environmental advocate who co-founded Greenpeace International and directed the original Greenpeace Foundation. ‘If hydrocarbon companies are forced to pay for the true costs of their product, which include these environmental costs, it will make the alternative energy systems more competitive.’ The Intercept, January 29.

A public defender and life-long crusader for the rights of indigenous people and farmers of the Amazon rain forest, Steven Donziger has also paid a heavy price for standing in between the oil-drilling interests of Chevron and the complete devastation of the Lago Agrio region of Ecuador. The corporation in question didn’t take Donziger’s life like they did Cáceras’ but took everything else away from him including his law license, his bank account, his passport, and other things. They did leave him with one thing though: an electronic monitoring device around his ankle that “he calls ‘the black claw,’” and that feels to him like “the government still there on my ankle.”

This is how capital works with its gradations of injustice. If you’re a Brown earth defender like Cáceres and living among the green, the government will mow you down. If you’re a white earth defender like Donziger and live far away from the green, the government clasps itself around your ankle and destroys your life. Either way, governments are still puppets in the hands of corporations like DESA and Chevron and will continue to play to their tune, alternative or otherwise, unless something drastic is done about it. Revolution anyone?

Justice for George Floyd’s lynching doesn’t end with the gaveling of Chauvin’s guilty verdict but with the gaveling down of institutional racism and violence. Similarly, climate justice won’t end with gradations of Green, alternative energy fixes, but as Cox says, with a rapid phase-out of fossil fuels.

Meanwhile in the dungeons of the U.S. Congress:

While we are clear that people should not come to the border now, we also understand that we will enforce the law and that we also — because we can chew gum and walk at the same time — must address the root causes that cause people to make the trek. — Kamala Harris, “Kamala Harris gets high-profile, politically fraught immigration assignment," Washington Post, March 25.

Really, Kamala? Wanna get to the “root causes” of “the trek?” How about starting with the economic consequences of the 2009 coup in Honduras and United States’ role in keeping it fed and intact? How’s that for Green?

We’re still far from recognizing our elite theft of the planet’s resources as the Old Brown Steal and are stuck on Green. Why else would someone like Rex Weyler talk about “alternative energy systems” being “more competitive” like as if that’s a good thing? This imagination, so far, lacks the ability to limit the usefulness of the green toward a landscape where there is sufficiency for all and excess for none. Something not driven by competition but by accountability and fairness and justice for all.

This is Part 2 of a continuing series Human Miasma. Please go here to see part 1.