The Bakken Oil Field in North Dakota has symbolically acted as a forward operating base for the latest industrial invasion of Indian Treaty Lands, bringing with it corruption, pollution and violence, not unlike the time when gold was discovered in the Black Hills of South Dakota during the 1800s.

Think the days of Europe exploiting the U.S. as a resource colony are behind us? Welcome back to the 18th century.

In 2012, the European Union (E.U.) burned 4.36 million metric tons of wood pellets for electricity, according to U.S. Industrial Pellet’s Seth Ginther. The U.K.’s portion was 30%, the Netherlands at 24%, Belgium at 16%, Denmark at 9%, and the rest shared by Sweden, Italy, Poland and a few other nations.

“When I started this job, people kept asking me, ‘Why do we have so much flooding now?’ and I said, ‘Well, there’s just one problem: The whole city’s four feet too low—that’s all!’” But as Miami Beach city engineer Bruce Mowry, the person responsible for maintaining and improving the island’s public infrastructure, steered his car through the Flamingo Park neighborhood this past January, his typically cheery mood dimmed. “You know, I drive around a lot, looking at all these streets and trees and homes and thinking about what’s coming,” Mowry said. “If we get the four feet of rise that’s predicted, all of this area will be two-and-a-half feet underwater.”

“This whole beautiful landscape’s going to change,” he said.

Conservationists, if they wish to succeed in legislating more wilderness and parks in the West, must actively counter the misinformation and flawed logic surrounding forest health, thinning and wildfires. It may seem counter-intuitive, but fighting the fear of fire is, often, the best way to promote new wilderness/park designation.

There is an on-going effort by some in Congress to attach riders to exempt thinning proposals from environmental analysis which will threaten existing proposed wilderness with new logging. Again these efforts are based on faulty understanding of forest ecology and wildfire behavior.

Climate scientist James Hansen will be heading to Paris to promote nuclear power − and attack environmental groups − in the lead-up to the U.N. COP21 climate conference in Paris in December.

During the November 15 Democratic Presidential Debate, Vermont Senator Bernie Sanders sounded an alarm that “climate change is directly related to the growth of terrorism.” Citing a CIA study, Sanders warned that countries around the world are “going to be struggling over limited amounts of water, limited amounts of land to grow their crops and you’re going to see all kinds of international conflict.” 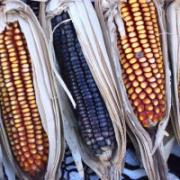 The CIP Americas Program has been accompanying the grassroots movement of campesinos, indigenous communities, consumers and scientists to maintain the ban on genetically modified corn for over a decade. The pushback from Monsanto and other biotech companies has been constant, but cross-sector organization has succeeded in protecting Mexico’s native corn and campesino livelihoods from the threat. This report describes the latest developments.

Twenty-two months ago, Mexico became a GM maize-free territory, when a Federal Judge issued the precautionary measure that suspended  authorizations to plant any genetically modified seeds of this grain, a staple food in the country, essential to its culture.

The United States Bureau of Prisons is trying to build a new, massive maximum-security prison in the Appalachian mountains of eastern Kentucky — and there’s a growing movement to stop it.

The prison industry in the US has grown in leaps and bounds in the past 20 years— a new prison was built at an average rate of one every two weeks in the ’90s, almost entirely in rural communities. As of 2002, there were already more prisoners in this country than farmers. The industry seems like an unstoppable machine, plowing forward at breakneck speed on the path that made the world’s largest prison population.

Today, about 716 of every 100,000 Americans are in prison. Prisoners in nations across the world average at 155 per 100,000 people. And in the US, Southern states rule the chart. Viewing these states as countries themselves, Kentucky ranks at lucky number seven.