Richard Nixon's agriculture secretary in the early to mid-1970s was Earl Butz, a man best known for advising the nation's farmers to “get big or get out.” And rural America has been following that advice ever since. Across most of the country, farms continue to grow in acreage and dwindle in number. Every state in the vast agricultural region stretching from Michigan to Kansas and Ohio to North Dakota has seen more than a doubling of average farm size since 1982.

Meanwhile, U.S. Department of Agriculture figures show that growing crops and raising animals has become more and more an old man’s pursuit, with two-thirds of farmers now more than 55 years old, almost one-third of them over 65, and 88 percent of them men.

But one region, New England, is having none of that. There, numbers of farms are increasing, with the biggest growth in the small-farm sector. And prominent in this boom are women and men in their twenties and thirties.

This movement gets support from organizations like the Young Farmer Network of Southeastern New England. Having started about five years ago as a series of potluck field tours known as Young Farmer Nights,YFN has grown into a deep-rooted community of new farmers determined to defy the old Butz Doctrine and get in small.

The network is riding the region's extraordinary wave of growth in numbers of new farmers, which increased 15 percent in Massachussetts and 27 percent in Rhode Island just between 2007 and 2012. (Nationally, the ranks of new farmers shrank by 20 percent during those same five years.)

YFN's current organizers are Tess Brown-Lavoie and Sarah Turkus of the Providence, Rhode Island- and Seekonk, Massachusetts-based Sidewalk Ends Farm, and the group's founder, Margiana Petersen-Rockney, a Massachusetts vegetable and livestock farmer and currently a food-literacy coordinator at Harvard University.

Petersen-Rockney has written that she started the network because “as a new farmer I saw that there were many of us struggling with the same issues as we developed our enterprises, but there wasn't an education or support system - everyone was reinventing the wheel and wasting valuable emotional, financial, and time resources.” YFN's work, she wrote, “focuses on cultivating personal and professional relationships and strong networks between new farmers of all ages and backgrounds in southern New England.”

For the most part, YFN's members either run their own farms or are employed as farm workers (or both). Young Farmer Nights still happen every couple of weeks from May through October, but the number of farms involved and the range of projects undertaken by the network have grown, while its membership has swelled beyond 300.

Recent public programs have featured sessions on practical topics such as tractor basics, small engine mechanics, apple grafting, and irrigation. There are also short courses that help new farmers with no previous experience learn not only how to grow crops but also how to deal with providers of inputs and insurance and how to market what they produce.

But YFN's programs are now aiming higher and wider. Nationwide, only 3.5 percent of farmers are Latino, 2 percent are Native American, and fewer than 2 percent are African-American. Likewise, the Northeast's new-farmer community is very white. So Brown-Lavoie, who is also on the board of the National Young Farmers' Coalition (NYFC), says YFN and the many other young farmer groups around the country see a need to join forces and change the face of agriculture: “In New England especially, it makes sense for us to have a regional movement to address issues like policy, resources, our historical context, and race—issues that don't respect state lines.”

A top goal of NYFC is have 25,000 more people running new, viable farms across the country by 2022, according to Michelle Hughes, the coalition's director of investments and partnerships. She says that in that effort, “we need to connect to issues faced by farmers of color, like land affordability, hiring practices, and especially to have more people of color in our own leadership.”

Squeezed from both sides

To undertake food production in America today means trying to break into an economic sector that is notoriously resistant, even hostile, to new entrants of any color. New farms almost never generate a livable income; as a result, beginning farmers (defined by the Agriculture Department as having less than ten years' experience) derive, on average, 98 percent of their income from nonfarm jobs. Similarly, most of YFN's farmers are supporting themselves with jobs in commercial agriculture or through nonfarm employment while they try to develop their own farms to the point of sustainability.

Brown-Lavoie says that kind of life can be unsettling. “Many younger farmers are finding it hard to understand their options,” she says. “They're asking, 'How full-time do I want to be? Will this be sustainable or not? What will be the rewards?' They are working out some emotions.” And among the many obstacles they face, one of the most formidable is the price of land.

In New England, the close proximity of cropland to populous urban areas has provided fertile ground for the boom in small-scale farming to serve local markets. But that same geography has driven ridiculous increases in the cost of farmland. Most farmers associated with YFN cannot afford to buy land and instead have lease agreements, either long-term, short-term, or “rolling”. Some, like Brown-Lavoie, see the farming of leased land as perhaps a good compromise. On this, she offers the long view: “Owning land here becomes complicated when you think about its history, about it having been stolen from the original inhabitants.”

Operating costs are another headache for farmers with just a few acres who can't achieve the economies of scale that big operations have. Most are producing vegetables or animal products, both of which are very labor-intensive. But when small-scale farmers have to hire extra people in order to get all of the farm's work done, they face that age-old dilemma of agricultural labor: when they pay employees a living wage—something more than the current minimum agricultural wages of $9.60 in Rhode Island and $8.00 in Massachusetts­—the resulting increase in output often doesn't compensate for the increased payroll costs, and their net income goes down. On the other hand, the notion of improving their balance sheets by paying farm workers minimum wage (or even less) is repugnant to many young farmers.

Margins are tightest for new farmers, and when the new $15-per-hour minimum wage goes into effect in New York, it will put even more pressure on that state's small-scale growers. Hughes, who lives in Hudson, NY, says, “They want to pay that much, but it's really, really hard.”

Over in the Young Farmer Network, people who run their own farms regularly rub shoulders with people who are employed on other people's farms, and that strengthens the resolve neither to exploit nor to be exploited. Those with their own farms have sought various ways around the problem. Some are simply working longer hours to get all of the work done themselves; meanwhile, many of them help out on one another’s farms when seasonal workloads become heavy.

At the same time their costs have risen, the young farmers have also come under pressure to keep their prices down. Hughes says the price of their product is effectively higher than that of food from industrial-scale farms largely because the big farms attract government subsidies and externalizes many of their costs. As a result, responsibly produced food from small, local farms is often out of reach of low-income families, including those who participate in the Supplemental Nutrition Assistance Program (SNAP, formerly known as “food stamps”).

New England's young farmers and food marketers have sought to address the affordability problem. Two dozen farmers' markets in Rhode Island, for example, have adopted a policy of returning $.40 worth of food-buying credits to customers for every $1.00 worth of SNAP credits they spend. A Brown University project with funding from USDA, called “Food on the Move,” serves low-income areas with a grocery van; customers who buy out of the van with SNAP credits get double their value.

In addition, Brown-Lavoie and Hughes say that many farms with community-supported agriculture (CSA) projects—in which customers subscribe to regular deliveries of in-season produce—price their subscriptions on a sliding cost scale, making them affordable for lower-income customers. In the CSA she co-owns, says Brown-Lavoie, “We have some members with good jobs and incomes. They can afford to pay more so other members can afford the food.”

As for lack of diversity in the new-farm sector, neither YFN nor NYFC has yet reached the stage of taking concrete action. “We're still in the stage of processing this,” says Hughes. But some routes to diversity are clear enough. For example, she says, “Farmers of color have been getting started largely through urban agriculture. We need to support that and other pathways into farming that people of color are already following.”

During an earlier tenure as director of the New Farmer Development Project in New York City, Hughes, with her coworkers, fostered the establishment of 19 immigrant-run farms covering 400 acres. “We saw so many immigrant families with such a wealth of agricultural experience, people who were now underemployed in the city.” So the project conducted training courses, largely in Spanish (“Not on how to farm—they knew that—but in how to start a business”) and advocated to help the new farmers get their produce into local farmers' markets, which can be highly competitive. The farms that were established are still going strong.

YFN and others in New England continue seeking ways to diversify their farming community. Meanwhile, says Brown-Lavoie, she and her fellow farmers are growing tired of being featured in pat-on-the-head media stories that paint images of plucky young white folks working the soil as a lifestyle choice. (A 2014 Associated Press story began with a one-line paragraph: “Farming is hip in New England.”) In response, she says that it's going to be essential to “unearth the mythology” of the movement, and that will mean “trying to figure out how to organize communally, how to respond to calls for more a justice-oriented approach and incorporate a framework on race in a landscape of labor versus farm ownership.”

Some unearthing went on last December, in western Massachusetts, when those difficult questions emerged at an all-day gathering of Northeastern new-farmer groups, cosponsored by NYFC. Brown-Lavoie was there, and she says this was no traditional agricultural conference; it was less about crops and livestock and more about the human context.

The first session of the day was to be a training workshop on oppression, structural racism and white privilege. Most attendees, including Brown-Lavoie and Michelle Hughes, expected that session to be lightly attended, with most people trickling in through the afternoon and the crowd peaking toward evening, when there was scheduled a mixer with free pizza. But by the time the workshop got started first thing in the morning, says Hughes, “more than a hundred white farmers had shown up, ready to talk about race and how it plays out in food production. As an African-American woman, I saw that and I thought, 'Wow. Maybe this shows how white privilege can actually be put to good use!'”

The session, says Brown-Lavoie, involved “three hours of discussion about racism and how the community of young farmers can seek justice in our work as we seek a future rooted in our history.” That discussion among the young farmers of the Northeast will most likely continue through this growing season and the seasons that follow.

Stan Cox is the research coordinator at The Land Institute in Salina, Kansas, and coauthor, with Paul Cox, of “How the World Breaks: Life in Catastrophe's Path, From the Caribbean to Siberia,” coming in July from The New Press. 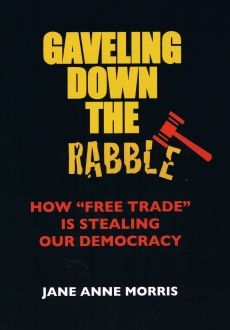