The World on Fire 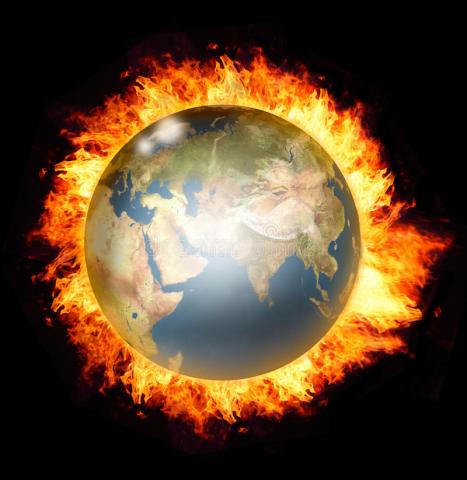 Massive uncontrolled unprecedented wild fires are consuming portions of the Amazon rainforest and several regions of the Arctic. Somebody somewhere must be asking why all of a sudden in unison, all over creation, two of the planet’s largest ecosystems are going up in smoke. It’s eerily spine chilling.

“Major fires have hit the Amazon and the Arctic for the second year in a row.” (Source: NewScientist, June 26, 2020)

Where's the world’s largest fire alarm when so desperately needed?

Sure, all of the mainstream press covers the fires and people hear about the fires and read about the fires. But that’s the end of any sort of impact because the sensationalism of reading about and hearing about massive fires thousands of miles away in vast wilderness areas doesn’t move the needle enough for people to express serious concern or even go so far as to panic. Maybe they should.

These are not regular ole run of the mill fires. Rather, these are firestorms so powerful that they create their own wind systems and self-perpetuate. More to the point, the world is on a biblical fire alert that posits the Book of Revelations 16:8 smack dab into contemporary society, to wit: Then the fourth angel poured out his bowl on the Sun, and power was given to him to scorch men with fire, and men were scorched with great heat.

For example, recent bushfires in Australia (2019) were not just unprecedented. They were “deadly catastrophic,” thus leaving some ecosystems “forever changed.” The conflagrations obliterated landscapes, not just patches of landscape but entire landscapes.

Why obliteration? Climate change is the villain. It supercharged the wildfires by turning landscapes into tinder. Contrary to political opinions by right-wing whacko nutcases, climate change does not constitute surreal events in thin air, rather, it’s power-packed hard-hitting damage to our “one and only” planet. It’s authentic.

Australia’s wildfires convulsed above and beyond any known scale of normal fires, from which animals are usually able to escape. They didn't. They couldn’t run fast enough! The fires took out entire landscapes, not patches of landscape that leave behind pockets of safety untouched for scampering animals. Nothing was left untouched by the hot lapping flames.

The wildfires permanently crippled iconic habitats that make Australia an ecological wonder for all to behold. From loss of crucial plant life to decimation of species that serve as a meal for a higher species, the ripple effects remain unaccountable, extensively beyond human calculation.

Now, two of the world’s largest, and most significant, ecosystems are on fire like never before, as more and more precious natural resources suffer waves of obliteration. Of course, normal fires in the wild are healthy; however, these fires are anything but normal. They’re truly biblical in scale.

“Six months of record-breaking temperatures have sparked massive fires in the Siberian Arctic this year. Great plumes of smoke were visible on satellite… temperatures more than 5°C above average over much of Siberia… A Met Office-led international study has concluded this period of exceptional weather would have been impossible had the world not been warmed by man-made greenhouse gas emissions.” (Source: New Warning Over Climate Change From Siberian Arctic, BBC News, July 15, 2020)

“What we’re seeing really is unprecedented… we’ve never seen the probability of a change of an event of more than 600 times. We've never seen a result like that, Professor Peter Stott, Met Office,” Ibid.

“Looking at the geologic record, we don’t think we’ve ever seen CO2 levels this high in about 5 million years… We are in uncharted territory, Dr. Katharine Hendry,” Ibid.

Meanwhile, bad vibes with strong undertones of contempt upend civilized society: America’s president Don Trump has tweeted 120 posts that poke fun at and ridicule climate change. Moreover, he has issued dozens of tweets claiming that “cold weather” disproves climate change. It should be noted that 62 million people voted for Trump in 2016 and many “live by his words.”

At the same time, in the real world of the Amazon rainforest, Brazil’s National Institute for Space Research reported 6,803 fires in the Amazon in July 2020 alone, nearly 30% more than July 2019 when the Western world went bananas over the loss of rainforest due to human-set fires. When in fact fires are not a regular feature of rainforests.

Now, environmentalists are going batty because August is traditionally the start of the human-generated fire season, but it already has a roaring head of steam. Not only that, but according to INPE data, the first six months of 2020 are already the worst on record for deforestation. Yes, “the worst on record.”

Sure enough, the Amazon rainforest, similar to landscapes in Australia in 2019, is subjected to obliteration forces, and it’s not just deforestation as the root cause. Climate change has kicked into high gear all across the magnificent rainforest with devastating drought conditions galore!

Excessive drought conditions, in part, originate early in the morning in garages around the world as fossil-fueled gasoline engines crank up, spewing out CO2, and the whir of a jet engine igniting, the blast of a diesel train engine cranking up, the murmur of a jet ski, ignition of hot coals for an electricity-generating plant, a furnace blast molding steel, all are the basis, the origin, of greenhouse gases that blanket the atmosphere, in turn, enhancing devastating severe droughts.

According to a landmark Amazonian rainforest in-depth analysis: “Several studies indicate that the region has been suffering severe drought since the end of the last century, as in 1997/1998, 2005, 2010 and 2015. The intensity and frequency of these extreme drought episodes in the AB during the last years, approximately one episode every five years with a significant increase in the coverage area, is remarkable.” (Beatriz Nunes Garcia, et al, Extreme Drought Events Over the Amazon Basin: The Perspective from the Reconstruction of South American Hydroclimate, Departamento de Meteorologia, Instituto de Geociências, Universidade Federal do Rio de Janeiro, Nov. 7, 2018)

Back-to-back-to-back-to-back 100-year drought events, every 5 years, are not normal, meaning something somewhere is horribly wrong. After all, major ecosystems that profoundly influence all aspects of the planet’s health and well-being are burning, collapsing, melting like there’s no tomorrow. The message is clear.

Along the way, Brazilian President Jair Bolsonaro feigns attempts to limit rainforest damage, but experts say the government’s response has been largely ineffective, more symbolic than real. In truth, he’s the primary driving force behind record-setting deforestation. Similar to Trump, on the world stage he’s a laughing stock and archenemy of the planet.

According to NASA, this year’s dry season will be more prone to fires than last year’s record-setting affair. Moreover, according to NASA, warmer ocean surface temps in the North Atlantic (global heating at work) create conditions for more extreme drought in the Amazon, as excessive ocean heat brings on far-flung damage. Everything in nature is somehow connected.

“The world on fire” is merely a prelude to a “climate gone berserk” disaster scenario that's almost certain to eventually take civilization down to its knees, by all appearances sooner than mainstream science suggests, but frankly scientists don’t make such predictions.

Yet isn’t a climate gone berserk scenario already playing out in real time, e.g., in Siberia, in the Amazon, in Australia?

Meanwhile, climate-related crises on a grand scale never before recorded throughout human history continue building to a crescendo, in earnest, right before society’s “eyes wide shut.”

Postscript: Reports out of the London School of Economics claim one-half of the Arctic fires are in peat soil, normally too wet and too cold to burn, but now burning because of powerful intense heat. Peat soil is carbon-rich and can burn for months/years, emitting carbon dioxide (CO2) and methane (CH4). (Source: Arctic Fires Released More Carbon in Two Months Than Scandinavia Will All Year, Grist, Aug. 4, 2020)