Will China Deplete the Oceans? 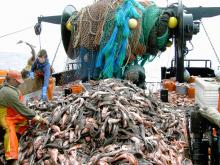 According to the Marine Stewardship Council, depletion of fish stocks is the most urgent threat to the world’s oceans.

“Demand for seafood and advances in technology have led to fishing practices that are depleting fish and shellfish populations around the world. Fishers remove more than 77 billion kilograms (170 billion pounds) of wildlife from the sea each year. Scientists fear that continuing to fish at this rate may soon result in a collapse of the world’s fisheries.” (Source: Sustainable Fishing, National Geographic, June 2, 2022) As a follow up question to scientists’ concerns: Who’s counting the illegal catch?

The population of Pacific Bluefin tuna, one of the ocean’s most ecologically as well as economically valuable top predators, has plunged 97% from historic levels.

According to the UN Food and Agriculture Organization, commercial fish stocks are 90% fully exploited. That leaves 10% exposed to the world’s fishing fleet.

As for example, the oceans are pretty much open prey to China’s 17,000 fishing vessels. It is the largest fleet in the world. This compares to 250 to 300 total vessels for both the United States and the EU. Not only is China’s fishing fleet 55 times larger than the combined fleets of the US and EU, but China is ceremoniously ranked as the worst abuser of sea laws as well as inhumane practices, based upon facts from the IUU Fishing Index.

“Over the last two decades, China has built the world’s largest deep-water fishing fleet, by far, with nearly 3,000 ships. Having severely depleted stocks in its own coastal waters, China now fishes in any ocean in the world, and on a scale that dwarfs some countries’ entire fleets near their own waters. The impact is increasingly being felt from the Indian Ocean to the South Pacific, from the coasts of Africa to those off South America — a manifestation on the high seas of China’s global economic might.” (Source: How China Targets the Global Fish Supply, The New York Times, September 26, 2022)

Compared to investigations of distant-water fishing fleets of Taiwan and South Korea, Chinese vessels have the highest rates of alleged IUU abuses. Examples include (1) hunting turtles, cetaceans and seals (2) shark finning (3) human rights abuse, including the withholding of money and personal documents. Curiously, there’s been a major shift from Chinese state ownership to private ownership of distant-water fleets, which effectively inhibits government oversight.

The EJF report claims that 78% of offshore fishery projects that are expressly approved by China’s Ministry of Agriculture and Rural Affairs fall within “exclusive economic zones of 20 African states.” These are crucial zones for the local populations. West Africa is a favorite target for these distant-water fishing fleets utilizing bottom trawlers that drag heavy nets across the seafloor capturing everything in sight including non-target species and undersized fish.

Offshore South America, the Galapagos Islands are a prime target for Chinese trawlers surrounding restricted areas full of abundant ocean wildlife. Satellite imagery 2020–2021 showed the fleets lined up along the edges of international waters surrounding Galapagos, as trawlers catch marine life entering and leaving the protection zone with clear evidence of some trawlers entering the protection zone for quickie catches within restricted areas.

“Out on the lawless high seas off South America’s Pacific coast, a quiet war over the overfishing of endangered squid stocks is being waged — and China is winning.” (Source: China Ramps Up Illegal Fishing in Lawless High Seas off South America, The Telegraph, February 10, 2022)

Global Fishing Watch, which utilizes data from ship transponders to monitor trawlers, followed the pathway of “transshipment” by Hai Feng 718, a Chinese mothership, which has refrigerated storage capable of holding tons of catch as well as fuel and supplies for the fleet at sea. This operation follows the coastline of South American year-round, 24/7, as trawlers catch whatever is available. Motherships are not illegal; however, transshipment makes it easy to underreport catch by individual trawlers and disguise origin of catch.

“The impact of these drift nets is absolutely disastrous,” says Vanya Vulperhorst, campaign director of illegal, unreported and unregulated fishing at Oceana Europe, a conservation non-profit that has investigated illegal drift net fishing across the Mediterranean. “They are indiscriminate in what they trap, and the result is that endangered and protected species are being killed in large numbers.” (Source: California: Trump Vetoes Bipartisan Driftnet Fishing Bill, Wine & Water Watch, Sonoma County Tomorrow, Jan. 4, 2021)

“The recreational fishing and boating community has long advocated for transitioning away from large-mesh drift gillnets which needlessly kill non-target species including sportfish,” said Jeff Angers, president of the Center for Sportfishing Policy. “Today marks a significant victory for marine conservation, and we are grateful for the bipartisan effort to get the Driftnet Modernization and Bycatch Reduction Act across the finish line.” (Source: Trump Vetoes Bipartisan Driftnet Fishing Bill, The Hill, January 1, 2021)  Oops, vetoed!