What Really Happened to American Socialism? 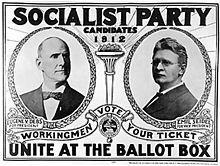 Despite the corporate hype, Democratic Socialism and Social Democracy are deeply rooted in the mainstream of our nation’s history.
The lie that they’re “foreign ideologies” starts with the fascist assault Woodrow Wilson waged against them during and after World War 1.
Their marginalization today by corporate Democrats and Trump Republicans is itself profoundly unAmerican.
Here’s the reality (as explained in greater length in my new People’s Spiral of US History):
In the decades after the Civil War, Robber Baron corporations captured the core of the American economy.  Led by JP Morgan and John Rockefeller, they pushed family farmers and urban workers deep into the depths of poverty.
In the west and south, agrarian activists formed the People’s (Populist) Party to demand public control over the monopoly capitalist forces that were destroying their lives.  Their socialistic platforms demanded democratic rule over the money supply, banks, railroads, telecommunications and much more.  They wanted female suffrage, direct election of Senators, referendum and recall.
But in 1896 the Populists were sabotaged by wimp Democrat William Jennings Bryan, who begged their support, then back-stabbed them in a presidential election he lost (of course) to the corporate Republican, William McKinley.
Soon thereafter the great labor leader Eugene V. Debs became an outspoken socialist.  Debs had formed the American Railway Union and led a great 1895 national rail strike that shut the nation.  He was jailed by President Grover Cleveland, a Democrat he’d previously supported.
While imprisoned in Woodstock, Illinois, Debs renounced corporate capitalism.  He called instead for an economic system owned and operated by America’s working people.  The means of production would be socialized for the good of the public, he said.  All citizens would be guaranteed a decent living, including food, housing, education, medical care and more.  “I am for Socialism,” he said, “because I am for humanity.”
Amiable, charismatic and incorruptible, the tall, slim Indiana-born Debs gathered a huge national following.  Tens of millions of Americans accepted Debsian Socialism as a legitimate part of the national dialogue.  The party elected hundreds of local officials throughout the country, including many mayors and two US Representatives.  Millions—-including many conservatives—-assumed (especially while Gene was around) the US might someday have a Socialist president.
Thousands flocked to Debs’s speeches on a moment’s notice.  Dubbed “the American Saint,” he demanded an egalitarian grassroots democracy that extended deep into the realm of material well-being.  Gene’s American Socialist Party renounced dictatorship of any kind and sustained a far deeper commitment to the Bill of Rights than either the Republicans or the Democrats.
The American Socialist Party strongly opposed American Empire.  It fought all-out against Woodrow Wilson’s plunge into World War 1.  In 1916 Wilson had run for re-election as a “peace candidate”.  Then he jumped in to save the British and French, who owed Morgan and Rockefeller huge sums of money.
To defend his hugely unpopular imperial war, Wilson shredded the Constitution.  He jailed thousands of Socialists and peace activists merely for speaking out.  He imprisoned Debs for demanding peace in a legendary speech at Canton, Ohio.
Wilson’s Attorney-General A. Mitchell Palmer then ran gestapo-style Red Scare raids that killed, maimed and jailed the leadership of the Socialist and radical labor movements.  Federal marshals trashed Socialist headquarters, burned union offices, broke warrantless into private homes, terrorized, beat and imprisoned anyone suspected of a trace of leftism.  Not until Mussolini and Hitler’s storm troopers took Italy and Germany was there a more brutal putsch anywhere in the west.
Wilson’s assault thrilled Samuel Gompers, head of the American Federation of Labor.  Gompers saw Debs as his chief rival for leadership of the union movement.  His AFofL embraced capitalism and empire, and banned blacks, women, immigrants and the unskilled.
In concert with Gompers and the Robber Barons, Wilson destroyed the American Socialist Party and what had been the mainstream acceptance of sharing the wealth as a legitimate alternative to corporate domination.  His ruling elite chose instead a form of what Theodore Roosevelt called “national socialism.”  Dominant corporations claimed to love a capitalist free market, but were always on the take for public handouts and massive bailouts.  Conquering an empire came with the “patriotic” territory.
Through the next century, Socialist ideals were kept alive by the likes of Norman Thomas, Dorothy Day, Michael Harrington.  Imperial Democrat/Republicans (and the corporate media) still relentlessly brand as “unAmerican” the view that our human community should be guaranteed the basics of life, and that our nation should not be conquering other countries.  With an iron fist the two parties and their talking heads have smeared democratic socialism and social democracy to keep it out of the mainstream dialogue.
Bernie Sanders has revived much of Debs’s ideology and excitement.  He generally stops short of calling for public ownership of the means of production.  But Bernie embraces Gene’s deep commitment to Social Democracy and a system based on human justice, grassroots equality and No Nukes ecological harmony.
In the 2016 primaries, despite underhanded sabotage from the corporate Democrat elite, Bernie got more than a dozen times as many votes as the (severely undercounted) million Gene officially got during his peak runs in 1912 and 1920 (when he ran from federal prison).
In the face of outright fascism and corporate corruption, it’s time to reclaim the legitimate mainstream acceptance of American Socialism.  The idea that our citizenry is entitled to ownership of our nation’s core economic institutions is as American as apple pie.  So is opposition to empire and a deep, abiding commitment to real grassroots social democracy.
Both Democratic Socialism and Social Democracy are American made.  Accept no substitutes.
——————

Write Harvey Wasserman for THE PEOPLE’S SPIRAL OF US HISTORY:  FROM DEGANAWIDAH TO SOLARTOPIA via solartopia@gmail.com.  His California Solartopia Show airs at KPFK/Pacific 90.7fm in Los Angeles; Green Power & Wellness is podcast at prn.fm.

Cuban Health Care: The Ongoing Revolution
Cuba has transformed its health care to the extent that this “third-world” country has been able to maintain a first-world medical system, whose health indicators surpass those of the United States at a fraction of the cost. Cuba was able to create a unified system of clinics, and evolved the family doctor-nurse teams that became a model for poor countries throughout the world. In the 1980s and ‘90s, Cuba survived the encroachment of AIDS and increasing suffering that came with the collapse of the Soviet Union, and then went on to establish the Latin American School of Medicine, which still brings thousands of international students to the island.