Ocean Heat, From the Tropics to the Poles

The heat being captured by the increasing load of carbon dioxide and other greenhouse gases in the atmosphere is subsequently transferred into the oceans for storage. This process — global warming — has raised the temperature of the biosphere by 1°C (or more) since the late 19th century.

Heat introduced into any material body at a particular point will diffuse throughout its volume, seeking to smooth out the temperature gradient at the heating site. If heat loss from that body is slow or insignificant, then a new thermal equilibrium is eventually achieved at a higher average temperature.

Thermal equilibrium does not necessarily mean temperature homogeneity, because the body may have several points of contact with external environments at different temperatures that are held constant, or with other external thermal conditions that must be accommodated to. Equilibrium simply means stable over time.

The heat conveyed to the oceans by global warming is absorbed primarily in the Tropical and Subtropical latitudes, 57% of the Earth’s surface. The Sun’s rays are more nearly perpendicular to the Earth’s surface in those latitudes so they receive the highest fluxes of solar energy, and oceans cover a very large portion of them.

What follows is a description of a very idealized “toy model” of heat distribution in the oceans, to help visualize some of the basics of that complex physical phenomenon.

Heat Conduction in a Static Ocean

The model is of a stationary spherical globe entirely covered by a static ocean of uniform depth. The seafloor of that ocean is at a constant temperature of 4°C (39°F), the surface waters at the equator are at 30°C (86°F), and the surface waters at the poles are at -2°C (28°F). These temperature conditions are similar to those of Earth’s oceans. These temperature boundary conditions are held fixed, so an equilibrium temperature distribution is established throughout the volume in the model world-ocean. There is no variation across longitude in this model, only across latitude (pole-to-pole). (See the Notes on the Technical Details, below) 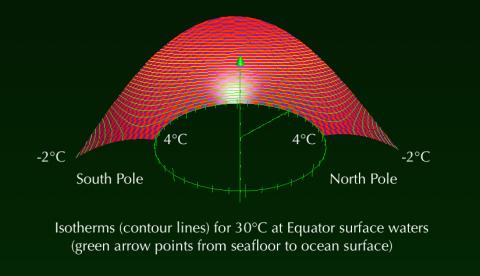 Figure 1 shows contours of constant temperature (isotherms) throughout the depth of the model ocean, from pole to pole. The temperature distribution is shown as a 3D surface plotted against depth, which is in a radial direction in a spherical geometry, and polar angle (from North Pole to South Pole).

The model temperature distribution is perfectly stratified — isotherms uniform with depth — in the Tropical-Subtropical Zones, from 30°C at the surface at the equator, to 4°C at the seafloor. On entering the Temperate Zones, the isotherms arc up into a nearly radial (vertical) orientation. In the small portions of the planetary surface covered by the Polar Zones the isotherms are now more horizontally stratified because the surface waters are chillier that the those at the seafloor.

Figure 3 shows the streamlines of heat flow (the temperature gradient) for this temperature distribution. At the equator the heat is conducted down from the 30°C surface to the 4°C seafloor. As one moves further away from the equator the streamlines become increasingly lateral, until they are entirely so at 35° of latitude (north or south) where the model surface waters are at 19°C. The heat flow is entirely horizontal at this latitude, which separates the Subtropical and Temperate Zones; tropical heat is being conducted laterally toward the poles. In the Polar Zones the heat flow is up from the lower depths because the surface waters are chiller than those at depth, and because there is too little temperature variation with distance along the surface to drive a lateral heat flow.

Much oceanic heat is distributed by currents, and many of these occur along the surface.

The average speed of the Gulf Stream is 6.4km/hr (4mph), being maximally 9kph (5.6mph) at the surface but slowing to 1.6kph (1mph) in the North Atlantic, where it widens (information from the National Oceanic and Atmospheric Administration, NOAA).

Heat-driven equator-to-poles surface currents on the model ocean were estimated from the combination of the pole-to-pole surface temperature distribution, and thermodynamic data on liquid water. (See the Notes on the Technical Details)

The pressure built up by tropical heat in the model ocean’s equatorial waters pushes surface flows northward (in the Northern Hemisphere) and southward (in the Southern Hemisphere): from a standstill at the 30°C equator; with increasing speed as they recede from the equator, being 2kph (1.3mph) where the surface waters are at 25°C (77°F); a continuing acceleration up to a speed of 2.8kph (1.7mph) at the 35° latitude (the boundary between the Subtropical and the Temperate Zones); and an ultimate speed of 3.6kph (2.2mph) at the poles.

The currents are converging geometrically as they approach the poles, so a speed-up is reasonable. Logically, these surface currents are legs of current loops that chill as they recede from the equator, plunge at the poles, run along the cold seafloor toward the equator, and then warm as they rise to the surface to repeat their cycles.

The model world just described is very simple in comparison to our lovely Earth. Since it does not rotate, it does not skew the north-south flow of currents that — with the help of day-night, seasonal, and continental thermodynamic inhomogeneities — creates all of the cross-longitudinal air and ocean currents of our Earth.

The irregularity of seafloor depth on Earth also redirects cross-latitudinal (pole-to-pole) and cross-longitudinal bottom currents, as do the coastlines of the continents; and the very slight and subtle changes in seawater density with temperature and salinity — neither of which is distributed uniformly throughout the body of Earth’s oceans —  also affect both the oceans’s volumetric temperature distributions, and the course of ocean currents.

Recall that the model ocean is bounded by constant imposed temperature conditions at its seafloor (4°C) and surface waters (a particular temperature distribution from 30°C at the equator, to -2°C at the poles). Since this model world is otherwise suspended in a void, if these boundary conditions were removed the oceanic heat concentrated at the equator would diffuse further into the watery volume, seeking to raise the temperatures of the poles and seafloor while simultaneously cooling the equatorial region. The ultimate equilibrium state would be an ocean with a constant temperature throughout its volume.

Additionally, if it is also assumed that the now “liberated” model ocean-world can radiate its body heat away — as infrared radiation into the void of space — then the entire planet with its oceanic outer shell slowly cools uniformly toward -273.16°C (-459.69°F), which is the “no heat at all” endpoint of objects in our physical Universe.

When our Earth was in its Post-Ice Age dynamic thermal equilibrium, the “heat gun” of maximal insolation to the Tropics and Subtropics warmed the oceans there; a portion of that heat was conducted and convected into the Temperate Zones and toward the Poles; where the “ice bags” of masses of ice absorbed seasonal oceanic heat by partially melting — which occurs at a constant temperature — and then refreezing. Also, the atmosphere did not trap the excess heat radiated into space. In this way cycles of warming and cooling in all of Earth’s environments were maintained in a dynamic balance that lasted for millennia.

What has been built up in the atmosphere since about 1750 is an increasing load of carbon dioxide gas and other greenhouse gases, which have the effect of throwing an increasingly heated “thermal blanket” over our planet. Now, both the heat conduction pathways and the heat convection currents, described with the use of the model, convey increasing amounts of heat energy over the course of time. As a result the masses of ice at the poles are steadily being eroded by melting despite their continuing of cycles of partial re-freezing during winter, and additional melting during summer.

Simple mathematical models can help focus the mind on the fundamental processes driving complex multi-entangled physical realities. From there, one can begin assembling more detailed well-organized quantitative descriptions of those realities, and then using those higher-order models to inform decisions regarding actions to be taken in response to those realities, if responses are necessary. This point of departure from physics plunges you into the world of psychology, sociology, economics, politics, and too often sheer madness. I leave it to another occasion to comment outside my field of expertise about all that.

Notes on the Technical Details

The cylindrically symmetric equilibrium temperature distribution for a static ocean of uniform depth, which entirely covers a spherical planet, was solved from Laplace’s equation. The temperature of the seafloor everywhere is 4°C, the surface waters at the Equator are at 30°C, and the surface waters at the poles are at -2°C. The variation of surface water temperature with respect to polar angle (latitude) is in a cosine squared distribution. Displays of the 3D surface T(r,ɵ) show isotherms down through the ocean depths at all polar angles (ɵ). The contour lines on the stream function associated with T(r,ɵ) are heat flow streamlines, the paths of the heat gradient (which are always perpendicular to the isotherms).

Bernoulli’s Theorem was applied to surface flow from the equator to the poles (no radial, nor cross-longitudinal motion) for incompressible liquid water with thermal pressure given by:

for R equal to the planetary radius to the ocean surface; Tp=-2°C; and using thermodynamic data for water between 32°F (0°C) and 100°F (37.8°C) that indicates a thermal pressure equal to 62.25kg/m-sec^2 in liquid water at 0°C; and that the density of water is essentially constant at 1000kg/m^3 (for the purposes of this model) within the temperature range of the data surveyed.

Inserting P(T°C) into the Bernoulli Theorem definition of equator-to-pole lateral (cross-latitudinal) velocity gives a formula for that velocity as a function of polar angle: