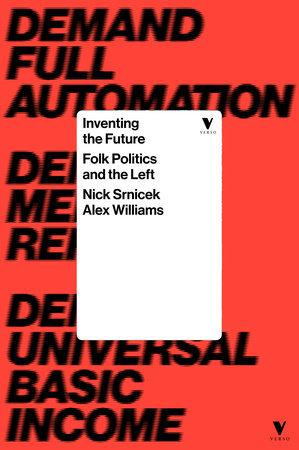 A review by R. Burke of Nick Srnicek & Alex Williams' Inventing the Future; Postcapitalism and a World Without Work.

A necessary ingredient for the success of the world-left is a cultural climate of modernism. We may debate exactly when the period of modernism begins, but referencing the history of Western Art can help us to define it. From its beginnings with the realism of Courbet in the mid-nineteenth century, to its’ golden age with surrealism in the mid-twentieth century, modernism was basically progressive and anticipatory of the future. This of course played a major role in it being resisted by the power elite of the capitalist world-system. Yet over time, by its’ novelty and ability to shock, modernism won the day and established itself as the cultural mainstream. Sections of the ruling class, themselves desirous of appearing ‘modern,’ chose to associate themselves with it. This cultural climate, which was forward looking, played a major role in the receptivity to socialist ideas by a wider public. Until the 1970’s that is. By 1980, even a naïve young middle-class art student from New Jersey could see that something drastic had happened to the larger culture. One only had to read Robert Hughes’ The Shock of the New; a requiem for a past era of high modernism, with its’ cynical dismissals of the progressive hopes and utopian dreams culturally embodied in that time. The postmodern era had arrived. The world-left has not fared well since. Nonetheless there are signs today that things are becoming more hopeful, and one of these is that left writers are becoming wise to this connection between socialism and modernism. Inventing the Future; Postcapitalism and a World Without Work by Nick Srnicek and Alex Williams is one of these hopeful signs.

While the title of the book is provocative, it is no more so than that of Andre Gorz’s 1983 book Paths to Paradise; On the Liberation from Work. While this is the only work by Gorz that is referenced by the authors, the fact that they recognize it is a welcome sign of Gorz’s ideas beginning to have a wider influence. Despite the futuristic imagery that such titles carry, all 3 authors are well within the ecosocialist current of the left.

Inventing the Future is in many ways a kind of intellectual astringent. The authors take a cool appraisal of the strategy and tactics of the left, and find them lacking. The trouble, the authors assert, lies with the left’s collective common sense: the prevailing leftist culture of action, organization, and thought. This they sum up with the term ‘folk politics,’ which means an exclusive preoccupation with the local; the small; consensus decision making; the ‘natural;’ prefigurative institutions; direct democracy; the personal; the emotional; the intimate; the immediate. The authors do not dismiss these things or minimize their importance, but claim that a lack of a more global and universal orientation has kept these activities from coalescing into a wider mass movement that can actually bring about social change. A greater attention to matters of scalability, to forms of organization on larger scales is needed. Folk politics is necessary but not sufficient.

Srnicek and Williams provide an historical overview of the situation that we face today. They recognize that without a conscious effort to imagine the future, and to counter the intellectual hegemony of neoliberalism the left’s activities are doomed to futility. The term ‘hegemony’ is well applied here, and the authors make reference not only to Gramsci, but Ernesto Laclau and Chantal Mouffe’s 1985 classic Hegemony and Socialist Strategy; Towards a Radical Democratic Politics. Laclau and Mouffe use the Gramscian concept of hegemony as a point of departure for a populist strategy whereby socialists move from a class-based politics to one that attempts to create, and lead mass alliances between progressive minded sectors of society. By organizing all those who can be organized a politics of democratic socialist counter hegemony can be pursued. Srinicek and Williams, despite some reservations about the reliance of Laclau and Mouffe upon postmodern theorists such as Foucault and Derrida, endorse this position as one that is most likely to deliver results.

Inventing the Future invites us to think seriously about how we might shape the future including its’ technology. They argue for a universal basic income, reduction of the working week, full automation, and a diminishment of the work ethic. They argue that these changes, coupled with a switch from fossil fuels to renewable energy, can form the basis of a sustainable society that undermines the imperatives of consumerism and productivism. As such their work intersects not only with the urban perspective of David Harvey’s Rebel Cities, but is an example of what Immanuel Wallerstein calls ‘utopistics,’ a sober attempt to put forward historically realizable alternatives for a future society.

One area where Inventing the Future is lacking is in presenting an alternative economic model for their postcapitalism. Albert and Hahnel’s ‘Parecon’ model is mentioned but criticized for its’ obsession with attempting to plan consumption and production in detail. They argue that there is a need for a model in which “rather than deliberating over every aspect of the economy, decisions could be made about certain key parameters (energy input, carbon output, level of inequality, level of research investment, and so on).” This sounds remarkably like the model outlined in Pat Devine’s Democracy and Economic Planning. Ironically the only mention of Devine in their book is a reference to an essay he co-authored!

The world built by the triumvirate of neo-conservatism, neoliberalism, and postmodernism has crashed, undermined by calamities far more serious than those which were used to dismiss Keynesianism, social democracy, and the welfare state. A new modernity is needed, one which can absorb the hard lessons learned during the postmodern era, and revive a renewed modernism as part of a counter-hegemonic strategy. During the era of high modernism, political tendencies inherited from Marxism that dismissed ‘utopian’ speculations could be successful because they existed within a historically based cultural climate which accepted a forward looking, and progressive view of history. Let us not forget that Marxism as well had its own utopian tendencies, which made the cultural climate favorable to it. That cultural climate no longer exists. For the world-left to be successful it must recreate and renew modernism in the cultural, economic, and political spheres, and must do so as part of a conscious, counter-hegemonic strategy. Reading Srnicek and Williams’s Inventing the Future; Postcapitalism and a World Without Work, would be a good way to help get that project started.