Tweet
By:
Stan Cox and Paul Cox
Topic:
Less of What We Don't Need

Last month, the social-media giant Facebook announced plans to build a new data center near Odense, Denmark. The expansion of server capacity was needed, the company said, to support "richer content" such as live-streaming and virtual reality.

The Facebook executive who made a public announcement of the decision (live-streamed, of course), noted that the new facility would have the "smallest footprint possible" and be "powered by 100 percent clean and renewable energy." Well, not exactly.

Recent reports by Rasmus Svaeborg for the Danish newspaper Information tell a different story. What may resemble, at least in the view from Silicon Valley, an exercise in green corporate responsibility will actually mean a big increase in Denmark's contribution to greenhouse warming.

Data centers consume prodigious quantities of electricity to power servers and keep them cooled down. The Danish government estimates that server farms now planned or under construction—primarily Facebook's and another being built by Apple in the town of Viborg —will add 4 million megawatt-hours, or about 13 percent, to the nation's current annual electricity consumption. Between now and 2040, server farms will account for a whopping one-third of the expected increase in Denmark's electricity demand.

Facebook and Apple are eager for their new data centers to share the bright green aura that surrounds Denmark's strong wind-energy commitment. But only about half of the country's electricity is supplied by renewable sources, so there's no spare green energy available to cover Silicon Valley's needs. The increase in national power consumption spurred by the new facilities will have to be generated from nonrenewable sources.

So the two corporations won't have "the smallest footprint possible" on Danish soil; they'll actually be substantially boosting the country's carbon output. Under the European Union's carbon emissions quota system, the server-powered increase in Denmark's emissions is supposed to be balanced by reductions in other countries' emissions. But that won't happen. Svaneborg quotes Peter Birch Sørensen, chair of the Danish government's Climate Council, who explains, "There is still a huge surplus of allowances [in the EU system], so increased emissions from Denmark will not cause lower emissions from other EU countries."

On its own, the prospect of getting green facelifts would not have been enough to entice the two corporations to set up shop in Denmark. According to Svaneborg, the crucial inducement was the ongoing rollback of an electricity tax called the Public Service Obligation (PSO). The elimination of the PSO will save the typical Danish household the equivalent of only a few dollars on its monthly bill. But it also means, writes Svaneborg, that the government will supply renewable electricity to businesses (including the new data centers) "at a price that is below production costs," in effect encouraging them to consume more power and cause more emissions.

There are additional ways in which repeal of the tax could hamper efforts to reduce Denmark's dependence on fossil fuels. Revenue from the PSO was earmarked exclusively for renewable energy development. Now, funds to foster new wind farms will have to come out of the taxpayer-supported general budget, where they will be politically vulnerable in every year's round of government budgeting and appropriation.

The PSO was introduced to avoid this very state of affairs, during the liberalization of the power sector in the 1990s, and it's a key reason why Denmark can offer tech companies such a green bounty of wind energy today. The country's renewable energy capacity was carefully cultivated over many years with a subsidy from every Danish power customer. Now Facebook and Apple have simply arrived for the harvest.

Given their vast cash reserves and self-proclaimed commitments to green energy, the two corporations could have built their own wind farms to power their new server farms, rather than piggybacking on Denmark's renewable-energy efforts. But even that would not have solved the deeper problem: wind and solar development, whoever is doing it, is a perpetual game of catch-up. Across the globe, whether in countries like Denmark who have vigorous clean-energy development or in slacker countries like the United States, capitalism's uncanny ability to crank out new electricity-dependent goods and services is easily capable of outstripping the buildup of renewable energy capacity.

Growth in technologies designed to curb air pollution (such as electric cars), to soften the impact of greenhouse warming (such as air conditioning), to purvey entertainment that can provide comfort in a world on the brink (such as streaming video), and to provide myriad other services threatens to scuttle our best efforts to wean society from fossil-fueled electricity.

Global efforts to curb greenhouse emissions were derailed last year by American voters. And America's image-conscious corporations are doing nothing to get things back on track when they play the "powered by 100 percent renewable energy" shell game.

Stan Cox (@CoxStan) and Paul Cox (@Paul_Cox) are the authors of “How the World Breaks: Life in Catastrophe’s Path, from the Caribbean to Siberia.” Write to them at cox{at}howtheworldbreaks.com. 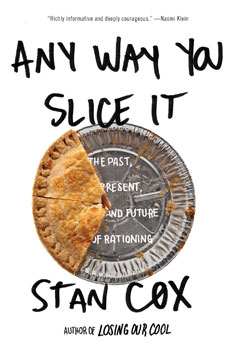