Climate: The Jerry Can Solution 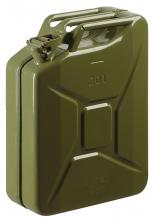 Every year we add about 55 billion tons (Gt) of carbon-dioxide and other greenhouse gases to the atmosphere, where they stoke heat waves, droughts, wildfires, floods, hurricanes, and other less visible consequences. The cumulative level rises like a flooding river that has reached our chin.

The scientists at the Intergovernmental Panel on Climate Change (IPCC) have abandoned their once sober and sedate tone and become downright panicked. In a 2018 special report on the prospects of keeping the global average temperature increase down to a relatively safe 1.5° Centigrade, the IPCC concluded that we will not only have to stop burning the fossil fuels oil, coal and methane (natural gas), but we’ll have to pull CO2 out of the air, a thing we can’t easily do.

Also every year, tens of thousands of fossil fuel projects are begun, continued or completed that will be adding greenhouse gases for decades to come — oil and gas wells, oil refineries, pipelines, power plants, highways, factories, buildings that heat with gas or oil and have gas appliances, not to mention cars, trucks, airplanes and ships. It all seems so normal that the cognitive dissonance doesn’t sink in.

It’s obvious what we need to do with our dwindling natural endowment of fossilized prehistoric plants: Keep it in the Ground! That was the name and slogan of a movement and campaign that appeared in 2016, but it didn’t really catch on. The stuff is still being pumped by a combination of vested industrial interests, a compulsion to grow the economy, public apathy, consumerism, and the fact that we in the industrialized world no longer know how to live without it.

How to keep it in the ground

We’ll have to muster the discipline to wean ourselves off these fuels. Set a diet and stick to it. Whatever time we can buy ourselves will mean the difference between a glidepath to a relatively soft landing and a civilizational crash.

There are already numbers for how much CO2 we can put into the air and still stay under 2° or 1.5°C of increased global temperature. I’ve picked one — 1300 billion tons. Such a figure is called a carbon budget, but I prefer to think of it as a reservoir we can draw down, or an emergency gas can you might carry in your car. The classic fuel can is the jerry can, invented by the Germans and adapted by the Allies during World War II. We have to fill the planetary jerry can with the last fossil fuel we can afford to use, seal the lid, and dole it out through the spout in annual amounts for essential purposes.

Governments have a track record of not seriously confronting climate disruption, and the United Nations is powerless to compel them. It will take a global citizens’ movement. The goal would be a treaty apportioning the contents of the jerry can among the nations according to their populations. For starters, we could set the rate of withdrawal at the rate of 33 Gt of CO2 as determinedby the International Energy Agency for 2019, the last year before the pandemic. First we’ll have to convert tons of CO2 into a mix of oil and methane (and the last sputtering coal power plants if absolutely necessary in some places) that would yield that amount of CO2 when burned. At that rate 1300 Gt’s worth of fuel would last 39.4 years.

The treaty must also put some limits and priorities on the permissible and impermissible uses of the fuel. The first priority is building the renewable electricity infrastructure of wind turbines, solar panels, transmission lines and large-scale batteries we’ll need for a scaled-down, far less wasteful and destructive economy, because that infrastructure can’t be built at present without fossil fuels.

Next, all the final uses for energy at the home, office or factory, must be converted to electricity. Renewable “energy” by its nature is renewable electricity, so we have to Electrify Everything, including transportation, industry and the heating of all buildings. The major renewable energy sources — solar, wind and hydropower — all capture solar energy flows (the sun causes the winds to blow and the waters to flow) and do not yield a combustible fuel.

National and international groups will need to be tasked with eliminating non-essential uses of fossil fuels, beginning with the most frivolous or obsolete, such as single-use plastic packaging, bitcoin mining, and fossil fuel mining and drilling equipment. Each country needs some leeway to define its economy in keeping with its own ecosystems, but the world in the future will be dominated by small farms practicing sustainable agriculture.

However, I’m being deliberately optimistic. The planetary jerry can may need to be much less full.

I took my numbers from the UN’s Emissions Gap Report 2019, where 1300 Gt of CO2 is the maximum estimate for keeping the temperature increase down to 2°C. The 2015 Paris accord incorporated an aspirational goal of no more than 1.5°C in the belief that 2° was not safe enough. But we’ve already blown the 1.5° carbon budget, so we might as well forget it and hope 2° is safe enough.

The uncertainty of these quantities of invisible gases is troubling, but we have to put a cap on future emissions or we will not stop runaway climate disaster.

There’s another problem with a lot less uncertainty: a solution based on the Gap Report’s carbon budgets is incomplete. At the top of this article I used a figure of 55 Gt for annual greenhouse gas releases. That includes the 33 Gt of CO2 from energy use and industry, plus the non-CO2 greenhouse gases like methane and N2O, plus emissions from land use practices such as deforestation and soil degradation.

Keeping it in the ground means not only leaving the fossil fuels there but returning carbon to the soil and forests where it belongs.