The Climate and the Republic, Melting Down in Real Time 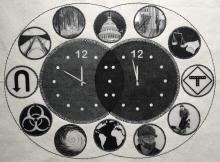 The United States is facing two grim prospects in 2022: one, that continued abuse of the ecosphere could render much of the Earth unlivable for humans and myriad other species, and two, that the United States’ current political drift toward autocratic rule could accelerate, dashing any hope of attaining a multiracial, pluralistic democracy. These two emergencies are intertwined. Either we find meaningful responses to both, or we fail dramatically on both. (For more on this image, see It's Time )

Our climate predicament has been apparent for decades, but last month, the Intergovernmental Panel on Climate Change issued its starkest assessment yet. The IPCC concluded that to sufficiently limit warming of the atmosphere, global greenhouse-gas emissions must be cut in half by 2030 and by 80 percent by 2040. If efforts fail and current climate policies are kept in place, humanity will experience a calamitous heating of 5 to 6 degrees Fahrenheit by 2100.

On our political peril, sober-minded elected officials, scholars, analysts, and others have for months been raising ever louder alarms. An attempted hijacking of the U.S. electoral process, they say, is under way. The Stockholm-based International Institute for Democracy and Electoral Assistance moved the U.S. out of its “democracy” category late last year, classifying us instead as a “backsliding democracy.”

We are entering what could well turn out to be, for the United States, the most consequential span of time since the 1860s. Movements both to defend the ecosphere and to remake our society, for the first time, as a multiracial, small-d democracy have gained strength in recent years. But we are now seeing a backlash that aims to take us down a very different road, toward far-right minority rule and accelerated degradation of the Earth.

Our nation has arrived not at a crossroads but at a T-junction. There’s no path leading straight ahead, no more business as usual. Historians of democracy and its decline tell us that we’ll soon be turning one way or the other—either toward a deeper, more diverse, inclusive democracy centered on justice and a livable future for all, or toward life under a corporate-dominated, far-right regime in an ecologically impoverished world.

We have known for decades that urgent action is required to prevent climate catastrophe, but the United States has frittered those years away. Time after time, legislation aimed at suppressing greenhouse-gas emissions, curbing the die-off of biodiversity, or halting the disruption of other critical Earth systems has been pronounced dead on arrival in Washington, out of fear that it would interfere with economic growth.

Recent events have brought this failure into sharper focus. Russia’s war on Ukraine disrupted global oil and gas markets and presented another clear opportunity to finally start addressing climate by reducing the world’s dependence on all oil and gas, not just Russian supplies. A bipartisan array of key figures in the White House and Congress called in unison for climate-busting increases in oil and gas production at the same time that the Republican half of Congress was busy endorsing, or at best ignoring, electoral hijinks in state legislatures that would hasten the nation’s descent toward one-party autocratic rule—further thickening the atmosphere of ecological/political dread.

Our institutions have failed us in ways large and small, but we now face the possibility of a much broader systemic breakdown. If we fail to block the far-right power grab, opportunities for positive governmental action, not only on climate but on a host of other issues we have long fallen short of addressing—general ecological degradation, Indigenous rights, economic and racial justice, health, food and agriculture, women’s rights, workers’ rights, and, crucially, universal voting rights—will slip even further out of reach.

Scholars who study the decline of democracies are warning that the Capitol attack of January 6, 2021, was just the beginning. Both the far right and the establishment right are seeking to exploit constitutional vulnerabilities and suppress the political agency of Americans of color. Working largely through state legislatures, they aim to gain control over all three branches of the federal government. From there, they could enact voting legislation to keep their regime in power indefinitely, reinforce the racial caste system, increase corporate power, further militarize policing, and keep extracting maximum fossil fuels for maximum profit.

In late 2020, with the peaceful transfer of presidential power under threat, the Center for Systemic Peace (CSP) downgraded the United States’ status from “democracy” to “anocracy,” the latter term signifying a nation in limbo between democracy and autocracy (i.e., tyranny). CSP edged us back, just barely, into the “democracy” portion of their scale in early 2022. Nevertheless, warned Barbara F. Walter, a historian and the author of How Civil Wars Start, “we could easily slip back into anocracy,” and from there, she wrote, things could go either way: “Anocracy is usually transitional—a repressive government allows reforms, or a democracy begins to unravel—and it is volatile.”

The current volatility grows out of right-wing desperation. The historian Thomas Zimmer wrote recently that for the white far-right, “allegiance has never been to democratic ideals—their acceptance of democracy was always conditional and depending entirely on whether or not it would be set up in a way that allowed for the forces of multiracial pluralism to be kept in check.” In recent years, Zimmer argues, “the lack of legitimacy for the restricted white elite version of democracy”—the system we have lived under all our lives—has become too stark to ignore. A solid majority of voters now find that hoary old version of democracy to be wholly unacceptable, so candidates who oppose pluralism find it harder and harder to prevail in properly conducted elections. Therefore, Zimmer concludes, “America will either slide into authoritarianism or make the leap to multiracial, pluralistic democracy.”

Zimmer is talking about that T-junction we’ve arrived at, but he uses more active imagery: if we don’t take a bold “leap” toward the multiracial democracy that America has so far failed to achieve, we will “slide” inexorably into an autocratic future. Our current, truncated version of democracy—of, by, and for only some of the people—cannot hold together much longer.

We Have Two Years to Get Ten

The IPCC’s report points to a stark conclusion: actions we take in the next ten years will largely determine whether a future catastrophic heating of the Earth can be prevented. One could now argue that in the United States, the climate movement faces an even shorter deadline. Given the anti-democracy camp’s fealty to the fossil-fuel industry and hostility toward climate mitigation, the question of whether we will have an opportunity even to work for, let alone achieve necessary federal legislation within the next decade could be decided in just the next two years or so. We’d better use the coming months wisely.

With vigorous mobilization, hard work, and solidarity, we could manage a leap toward a more pluralistic and just democracy. Nevertheless, I’d like to discuss how we could keep striving toward a livable future even if we were to find ourselves living under a far-right regime. Such a discussion will be productive whether or not the worst comes to pass. We need to be aiming for a radical social-ecological transformation now, whichever direction the U.S. polity turns in the period ahead.

I’m among those who have argued that although reducing emissions and respecting ecological limits at the individual, household, and community scales is good and necessary, national action is also essential. With so few years left for the U.S. to eliminate fossil-fuel use, only a declining national cap on fossil fuels use can ensure that we are all playing by the same fair rules, and that oil, gas, and coal use is driven down to zero quickly enough. In a society where it’s the people who decide, we still would have a fighting chance to get such policies passed, at long last, into law. But if the anti-democracy camp manages to take the driver’s seat and shift federal climate policy into reverse, we will need to redouble our efforts to confront the climate emergency and preserve economic and civil rights in other ways, wherever and whenever we can.

A Tsunami for Democracy?

In marginalized communities, many might well respond to all these warnings of climate chaos and the death of democracy by asking, “What democracy?” Structural racism has meant a history of slavery and state-enforced racial terrorism that much of the country simply won’t acknowledge. Black, Latino, and Indigenous communities have been fighting injustice for centuries and have intergenerational traditions of resistance that continue to this day. Indigenous peoples continue to be at the forefront of the climate movement, standing up to the fossil-fuel industry and undermining its ability to operate. These communities are also at the forefront of educating the public on non-Western traditions for living in harmony with the Earth and its natural limits.

If the right takes full power in Washington and a majority of state capitals, and we lose much of our ability to effect change through the ballot box, grassroots climate action will become more important than ever. For that, movements like the Indigenous-led pipeline struggles, Extinction Rebellion, youth climate strikes, the Sunrise Movement, and the like provide sterling models. They have helped lift climate and its broader ecological-social context to near the top of the list of public concerns, polls show—even in the face of corporate and political hostility that is explicit, unapologetic, and often violent. Meanwhile, existing and emerging efforts to bring human activity into harmony with the rest of the ecosphere must carry on, whatever the sociopolitical context. For instance, efforts here at the Land Institute, where I am, and among our allies, to transform food production and reverse soil degradation, biodiversity loss, and greenhouse-gas emissions, will play a central role.

The possibilities looming ahead may look grim, but we are not powerless bystanders capable only of gawking at events as they unfold over the next two years and beyond. Pro-democracy voters could, through our sheer numbers, overwhelm the anti-democracy camp’s attempts to subvert the Constitution. The movements for climate mitigation and justice, Indigenous sovereignty, Black lives, economic democracy, and the Earth could merge into one collective wave. Other events, unforeseeable today, also might change the landscape of possibilities in our favor.

But we don’t have time to stand back, to wait and see. The clock is ticking. In the upcoming months, we’ll need to strive for a leap even as we brace ourselves for a slide.

The original version of this article was published by City Lights Books as part of its monthly “In Real Time” series. Listen to audio editions of all “In Real Time” dispatches, as well as the monthly  podcast. Also don’t miss the evolving "In Real Time" art project.