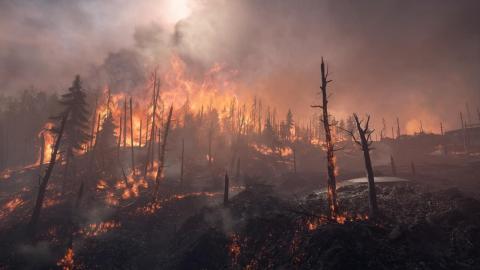 Amazon Day, a day of celebration for over 100 years on September 5th has passed. Amazon Day commemorates the creation in 1850 of the Province of Amazonas, encompassing 60% of Brazil and extending into Bolivia, Peru, Colombia, Ecuador, Guyana, Suriname, Venezuela, and French Guyana.

Meanwhile, illegal fires in Brazil’s Amazon rainforest rage on, and on, and on, stronger than ever. Nowadays, in spite of the spirit of Amazon Day, suicidal spates of lawlessness rule Brazil’s precious rainforest.

Indeed, leading scientists believe there is genuine concern that the Amazon rainforest ecosystem could collapse. Already, severe devastating drought sequences have hit every fifth year like clockwork so closely spaced together that normal regrowth does not happen. Thus, the ecosystem is inordinately weakened in the face of human-generated firestorms.

As substantiated by NASA, the rainforest doesn’t react like it used to. It does not have enough time between droughts to heal itself and regrow. Throughout all of recorded history, this has never been witnessed before, a fact that is horribly concerning and downright depressing. (Source: NASA Finds Amazon Drought Leaves Long Legacy of Damage, NASA Earth Science News Team, August 9, 2018)

Not only is an ecological breakdown apparent above ground, the breakdown is also found underground. Based upon current images by NASA’s GRACE satellite, the Amazon is in tenuous condition in an unprecedented state of breakdown. The GRACE-FO (Gravity Recovery and Climate Experiment Follow-On) satellite system monitors water levels stored deep beneath Earth’s surface. GRACE’s images detected large areas in what’s classified as “Deep Red Zones,” meaning severely constrained water levels. Nothing could be worse.

Furthermore, the peak rainy season, which runs from December to February, was among the top 10 worst on record this year, with just 75% of the season’s usual rainfall.

Furthermore, it is important for world opinion to realize that raging fires are not normal in rainforests, which contain tons of wetness, dripping moisture, and cool air. In fact, even during normal dry seasons, if a fire starts in the undergrowth, it peters out quickly because of extreme wetness throughout rainforests, a moniker that perfectly describes the ecosystem — “rain… forest.”

Not only are fires an aberration under normal conditions, but also deforestation, which brings on the fires in the first instance, is illegal, especially in Brazil. Yet, deforestation is rampant with massive fires as part of the clearing process. It’s highly probable that nearly all 63,000 fires for the current year are the result of illegal deforestation.

Under the 2015 Paris Agreement on Climate Change, Brazil committed to eliminating all illegal deforestation — which, according to Human Rights Watch, accounts for 90 percent of all deforestation — in the Amazon by 2030.

The Amazon contains the world’s most precious natural heritage, teeming with the richest biodiversity on the planet, including break-through medicinal resources, many not yet discovered, and most importantly, serving as the single most significant global climate regulator. Without the Amazon, life throughout the world turns miserable, beyond wildest imagination, like a Stephen King horror movie.

World leaders, like France’s Macron, have called him out in the past, but Bolsonaro merely flips ‘em the bird. He's living proof that mean-spiritedness, as it originates via purest of ignorance, goes a long way towards deflecting criticism. For proof, the international community has done nothing substantive to stop the illegal fires.

Bolsonaro wins as the world loses.

And, abiding by the precepts of the Trump playbook, in an address to the UN, he said, “the Amazon remains pristine and virtually untouched,” claiming that Brazil is “one of the countries that protects its environment the most.” At the time of his speech, the Amazon rainforest was burning at record rates and illegal deforestation had surged by 84% following his inauguration.

In his UN speech, Bolsonaro especially heaped praise on US President Donald Trump for supporting him, even as he was under fire by the international community.

Meanwhile, because of excessive global warming, climate change has turned up its intensity way-way-way beyond the models of climate scientists as registered with the Intergovernmental Panel on Climate Change (IPCC). From Antarctica to the Arctic, the climate system is out of control, including the all-important life-supporting integrity of the Amazon Rainforest.

Sadly, the facts are indisputable based upon numerous scientific reports; the world climate system is literally coming apart at the seams as excessive use of fossil fuels spews CO2 that blankets the atmosphere that retains more and more heat that undermines the world’s major ecosystems. Given enough time, society has an insurmountable problem, like right now.

Look to Siberia, the Arctic, Antarctica, Greenland, Australia, and the Amazon Rainforest for incontestable evidence. Meanwhile, severe droughts haunt the world from the Amazon to the Middle East (900-year drought) to Australia (800-year drought), throughout SE Asia to all of Central America (“the Dry Corridor”), to a 10-year mega drought-turned-desertification in central Chile to a massive 60-year drought in Brazil, to totally dried-out to-a-crisp portions of Africa, t0 China’s Lancang River (the Danube of the East) at 100-year low water levels in Thailand, and the list could go on and on.

In turn, eco-migrant footsteps follow in kind, kindling rightwing politics throughout the world.

All of which prompts the obvious query: Will the nations of the world never seriously coordinate efforts to combat fossil fuel-generated global warming with its deadly accomplice, abrupt climate change?